Made for Fashion pairs leading fashion designers and makeup artists for a candid conversation about creativity, collaboration and catwalks

“Anarchy, to the extent to which Elagabalus pushes it, is genuine poetry,” wrote French dramatist Antonin Artaud about the cruel, decadent and short life of the Roman emperor. A brutal and perverse leader who ignored his responsibilities in favour of his own sensual gratification, Elagabalus is also the subject of Francesco Cavalli’s final opera, from 1667 – Eliogabalo.

When director Thomas Jolly needed a costume designer for his production at the Opéra de Paris, he knew where to turn – Gareth Pugh, the British avant-garde fashion designer with a flair for gothic drama. Teamed with makeup artist Val Garland, they set about creating a rich look for the cast that projects the necessary sense of power, violence and chaos.

“There's a considerable degree of sadism and narcissism here and it's interesting to design looks that convey those character's intentions, which are vast and toxic,” explains Gareth. “I wanted to explore the idea that power can come through creating fear, and for the audience to sense that from the way these performers appear on stage.” 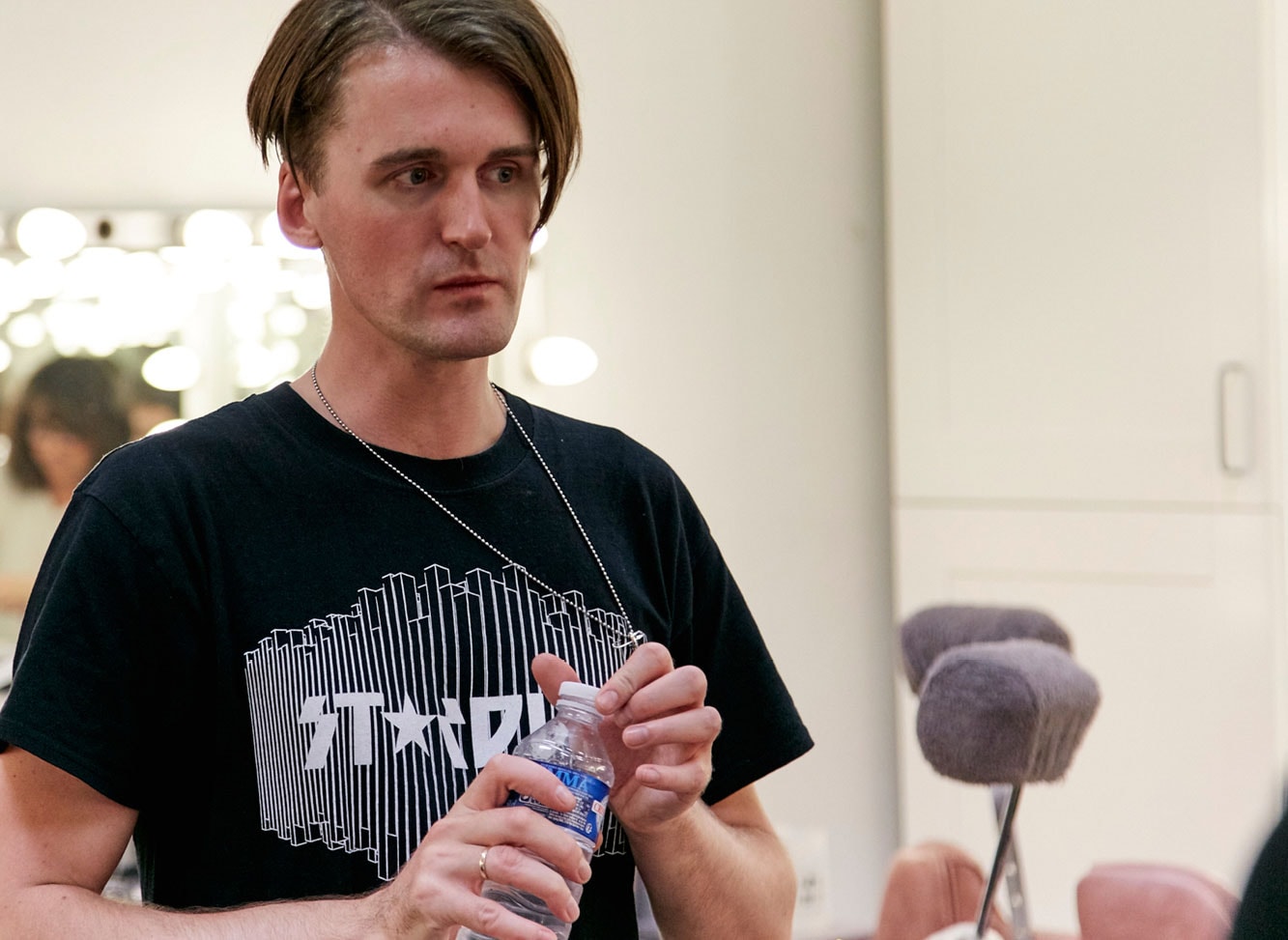 How did the idea of you doing the designs for this project come about? And what was your first reaction to the idea of working on an opera?
GARETH PUGH: Last year, I worked with the British choreographer Wayne McGregor on the costumes for a ballet that opened at the Palais Garnier, so I had actually worked in the ateliers at Opéra National de Paris before and had met the head of the costume department. She had spoken to the director of Eliogabalo, Thomas Jolly, in the development stages of the project and suggested we meet…It turned out he was familiar with my work and had used it as reference and inspiration for previous theatre projects, so it all came together pretty quickly! I knew immediately it was something I had to do.

What appealed to you about Eliogabalo aesthetically? And how did you approach your designs for it? There are colour-coded banquets, orgies, decadent street parties…all sounds quite fun.
A friend of mine suggested I read Antonin Artaud’s first-person novel about Eliogabalo and the Roman court, and it was just totally captivating, and so visually compelling. He was a really extreme character and knew how to use a visual language to project power and status. Having read some of these stories, I started to see how it could all come together. Those visuals, coupled with the fact there's a real twisted aspect to the plot meant I knew this was something I could really get my teeth into.

“He was a really extreme character and knew how to use a visual language to project power and status…and the fact there's a real twisted aspect to the plot meant I knew this was something I could really get my teeth into.” – Gareth Pugh What were some key references for you throughout the process?
The opera was originally written in 1667 for the Venice Carnival, and I thought it was interesting how Eliogabalo basically has the societal function of the Carnival King, or the jester, the fool… Francis Bacon's studies of Pope Innocent X – that gaping mouth as a symbol of insatiable hunger and consumption, and the deep purple of his robes, which of course was the colour of power in Imperial Rome…It’s all of this mixed with pop imagery. Jeff Koons's sculpture of Michael Jackson and Bubbles was on our mood board, for example. Also, the chaos symbol was one of the motifs I knew I wanted to use – the explosive dynamic of arrows and a graphic sunburst motif is very present in the designs, so I was looking a lot at Cornelia Parker’s incredible installations of suspended fragments. They look like frozen explosions, sort of a broken Roman mosaic…It's all in there!

Which characters in the opera appealed to you most and why?
I think the darker characters are incredibly powerful. Everyone has to hate Eliogabalo so that everyone can be unified and pacified. He is the evil that channels all the underlying violence and chaos of their society.

How did you work with Val on creating the looks for the characters?
I worked out a kind of map – an actual drawn out diagram! – of all the characters and their relationships with each other and their place on what you might describe as a moral spectrum, then Val came in and started brainstorming. She's the best in the business, so her initial instincts were bang on. In the end, we had a really wide field of ideas and references, but somehow it was all in the same world – really bold and graphic, quite violent or urgent. We didn’t want it to be tied to a specific historical setting – we wanted it to feel timeless in a way…like a dark dreamscape. So, there are visual codes that run throughout the costume and makeup – red, purple, gold and grey – but applied in a really savage, all-or-nothing way. “How could you look at this story and not see the relevance? An agent of chaos, a crowned anarchist, emerging amid a climate of greed and narcissism?” – Gareth Pugh

How relevant do you feel the story is to what is happening today?
If you consider your work as part of a cultural dialogue, then of course, how could you look at this story and not see the relevance? An agent of chaos, a crowned anarchist, emerging amid a climate of greed and narcissism? It's essentially about an empire eating itself. So, it's alarmingly relevant. And that's not something I would choose to sidestep. If anything, it made me go at this harder… There are several looks within both the opera and my collection that really toy with the “performative” aspect of power, which is a theme that runs throughout both projects. We have this series of looks that are going to be in my show, all these garments that have been painstakingly hand-embroidered with what looks like a form of faceted gold bullion, but if you look closer, what first appears as an opulent display of wealth is in fact a mosaic design based upon the chaos symbol. So there's a real unease with wealth and power there, which I think reflects the time we live in.

Lastly, how did this whole project influence your collection for SS17?
I think that the opera is so heavy thematically and aesthetically that perhaps it's pushed me toward trying to create something that's almost like a ray of light coming out of the darkness. I wanted the collection to begin with that sinister, severe feeling and end with a flourish of hope and defiance. Val really wound it back and she's taken it to a place where the tyrant or the bully is forced to basically submit to a maternal sentinel...There's one motif that runs throughout the collection and that's the totemic symbol of the sun. In one way the sun is a symbol of creation and warmth – an explosion of power and life – but it can also represent tyrannical power and destruction. With the collection, I wanted to explore that duality, to show two sides of the same coin, but in the end for grace to triumph over nature.

COMING SOON – Go backstage in London with Gareth Pugh and Val Garland in PART 2 of MADE FOR FASHION, as they put the finishing touches to his SS17 presentation

WANT MORE CULTURE?
SIGN UP TO HEAR THE
LATEST FROM MAC